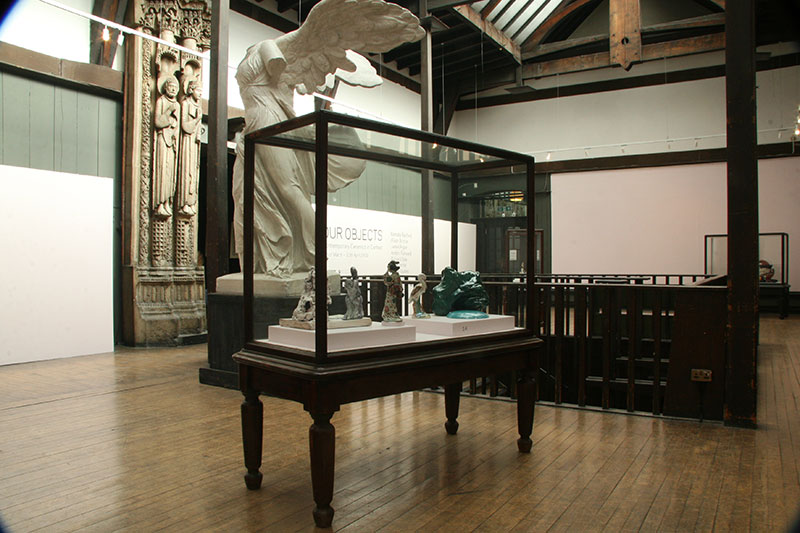 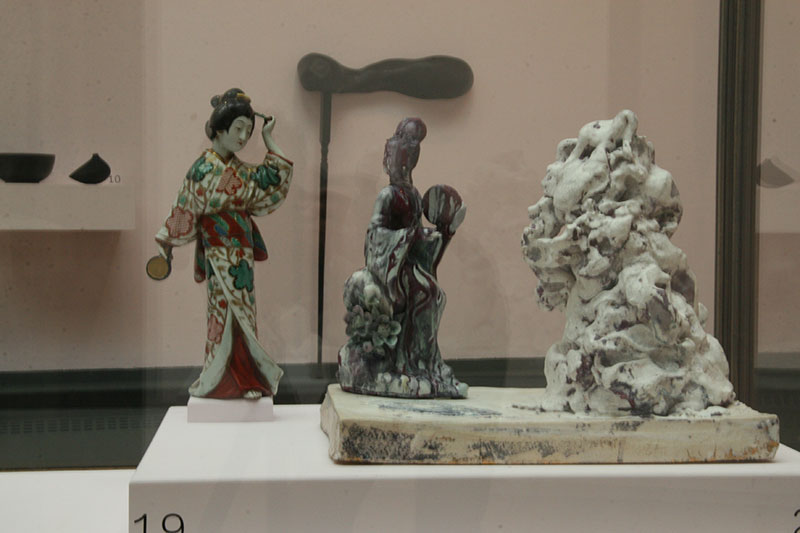 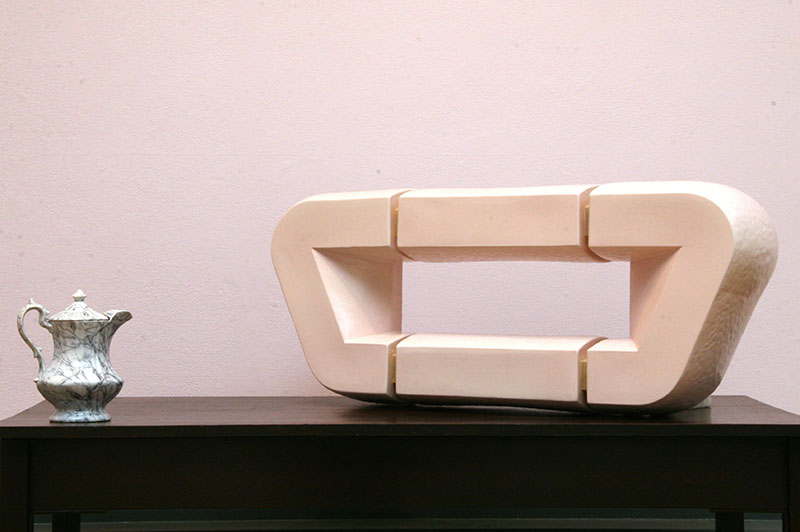 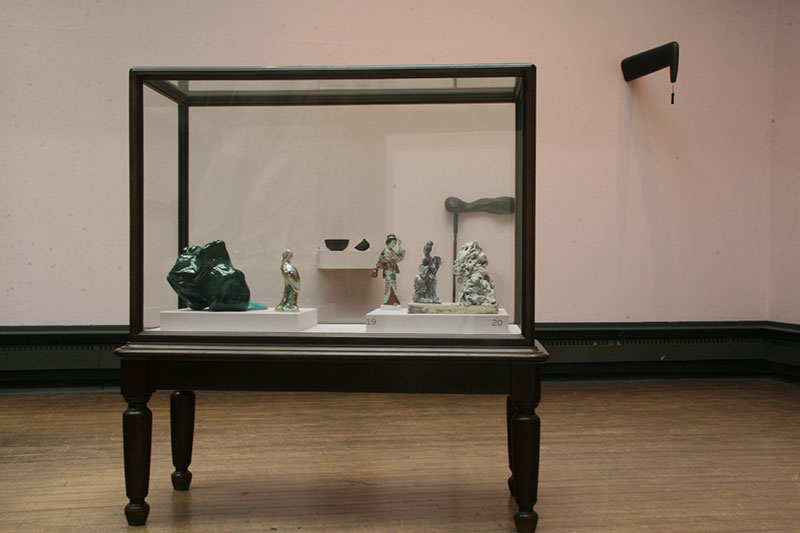 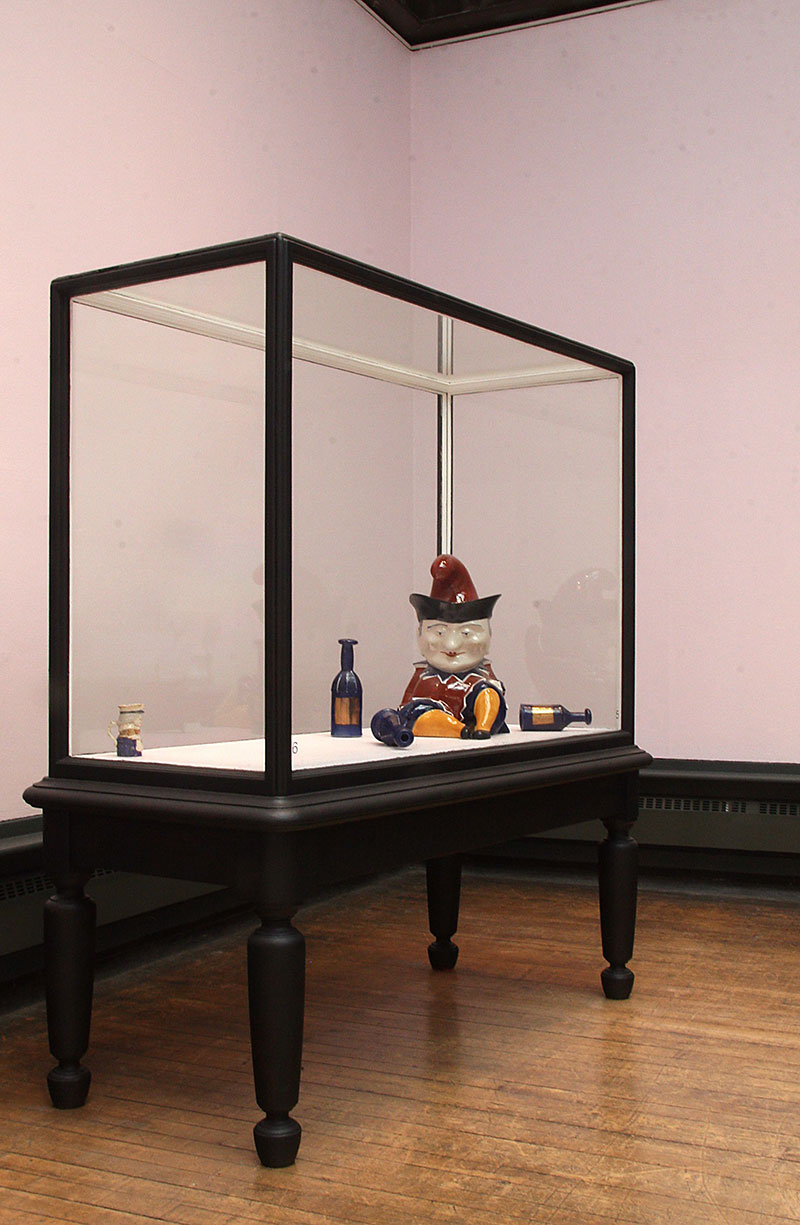 This exhibition represents a broad range of concerns, styles and making schools. Episodic in its approach, the exhibits are linked by a material, ceramic, and a simultaneous regard and defiance for that material’s traditions. Works may be categorised – functional, decorative, figurative or abstract – but these categories in turn can over lap and contradict themselves. Ceramic is after all a versatile material that manifests in varying forms of varying qualities. When a definition of the genre is so elusive it may be better to consider the particularities of a range of specific, personal and at times, idiosyncratic objects.

Nine contemporary ceramicists work has been paired with an industrial and historic ceramic objects to highlight similarities and illustrate discrepancies that exist between new work and recognisable generic types. These ‘foils’ aim to ground each piece and offer ways into the varying schools of thought. My approach is consciously personal but is nevertheless intended to illuminate aspects of the medium’s history and tradition. The selected pieces do not illustrate absolute relationships and indeed could be cross-referenced with each other. Furthermore these ‘foils’ are affordable, accessible and relatively commonplace.  They serve to flatten the hierarchy of objects often dictated by monetary value, rarity and prestige and, by showing the works alongside each other, demand a more democratic critique based on form and content.

Though similar, there is a fundamental difference between industrial ceramics and studio pottery; the autonomy upheld by the potter responsible for their own work at all stages of the ceramic process as opposed to the Fordian setup of the factory floor. The main effect of being an autonomous ceramicist is that the maker is at liberty to question the object at every stage of its conception. They must not fit the brand or kowtow to economy. They are free to borrow from existing techniques or invent new ones. This way the artist can impact on every stage of the process, and is at will to engage a critical framework that considers every aspect of the work.

In my selection inspirations fostered by the studio potter reflect their origins in a more industrial practice. Richard Slee consistently makes use of the popular appeal of ceramics, appropriating recognisable formats as social commentary for a more critical engagement with that tradition. Alison Britton extrapolates particular references, decontextualising the source of the turquoise glaze used in Sluice and incorporating it into her own particular framework. Similarly Minton Hollins adopted Iznik motifs for his early Victorian architectural tiles. By adopting a familiar reference in the work the viewer is enticed to consider the unknown or the new. Xavier Toubes offers us such a dialectic view of our perceived sense of form and beauty – de-formalising the figurative to imbue the work with a stronger sense of itself.

By humanising the inanimate these makers offer another strategy for understanding the world around us. James Rigler refers to the anthropomorphic qualities of a jug obliquely in Mouth.  Anders Ruhwald takes the usual stuff in our homes and creates hybrids, neither sculpture nor functional objects they are equally awkward in a gallery or home. He employs a mass-produced aesthetic: tassels and candleholders with a whiff of the DIY store about them. He rejects the predictable to create sinister shadowy works. Dawn Youll evokes the stuffy parlor’s penchant for ‘Collectibles’. Her method and inspiration has much in common with the Campsie-ware Stork I have paired with her work. A View though is not simply a landscape. Modeled from an insignificant lump of clay it is enlarged and cast to resemble a mountain. Youll imbues the work, not just with a view, but a way of seeing. Estrangement and disorientation have become common backlashes to the perceived comfort of domestic ceramic production. While ceramic practicioners seem unable to break wholeheartedly with its tradition, contemporary makers seem keen to critique it.

Returning to the canon of historical ceramics makers are drawn to sentimental themes of attachment and nostalgia. Hans Stofer uses our broken discarded effects to revaluate them. Highlighting the individual and personal meanings we attach to our objects that can outlive the artifacts themselves. Picking up on our cultural detritus Stofer reworks the shards into poignant anecdotes of the everyday. Similarly Barnaby Barford recycles but does not use objects to convey aspirations nor confirm emotions. His tableaux act as morality lessons for our times; fables in the Victorian sense they pick up on our social failings using factory made figurines to present bitter parodies of themselves.

My aim with Our Objects is to illustrate the contradiction embodied in a material that can be so many things while consistently returning to a set of values dictated by specific concerns, histories and relationships. In this show the material is shown to be particular to historical rather than universal influences. Its desire to be expressive beyond function has constantly placed work in a quasi-domestic mode where the content and concerns return to de-familiarise the familiar, reinterpret the standards and remake traditional models to remain relevant cultural signifiers. Royal Doulton, by employing ‘important’ characters from history and literature set out to make “heirlooms of tomorrow” but it is the materials constant preoccupation with the incidental and everyday, the detailing of the overlooked and our perceptions of the norm that continue to imbue ceramic objects with a sense of ownership and belonging.

Like Darby and Joan the words domestic and comfort seem to belong neatly together, an unthreatening pairing that is both reassuringly conventional and totally expected. The domestic, usually taken as relating to the home or everyday life within the household, is essentially private rather than public, a place where we can exert some control, the ‘nest’ where we can relax, put our feet up, eat beans out of a tin and slop about in a dressing gown. Yet, as Our Objects makes evident, although the majority of the artists are showing work that relates in oblique ways to ‘the domestic’, they do so with a sideways look, with a twist. The work embodies both heimlich, homely, and its opposite unheimlich. The domestic can carry side effects.

One of the truisms of objects made in clay is that for thousands of years they have primarily been used in or around the home, whether in the bricks forming the walls, the pots used for cooking or the containers used for storing or serving food. This point is well made in Our Objects where historical pieces – be they collectable figurines or a Victorian tile – are paired with modern forms, juxtapositions that both affirm the presence of tradition while at the same time question or even reject its relevance to today. For Hans Stofer, the merging of past and present, nostalgia and melancholy is central to his work. In disguising fragments of industrially-made cups and bowls he forces us to consider his and our relationship to tradition.

Within the canon of familiar objects some, such as the jug, have taken on iconic status; they are seen as a symbol of giving, a horn of plenty, an indicator of generosity. Think lavishly decorated harvest jugs proudly brought out when crops are collected and used to hold goodwill liquor; their presence signifies a successful crop, a time of rejoicing and promise for the future. Such ideas are referenced in Alison Britton’s form Sluice, but in a complex combination of giving and withholding, the ordinary made extraordinary.

The architectural resonances that Britton incorporates in Sluice are addressed more directly by Anders Ruhwald. The space we inhabit and the space we need are all part of a complex equation that involves as much suggestion as statement. Ruhwald merges the private and the public leaving us pondering quite were we are. Just as, when looking at his work, we might sense we have been here before, that we are seeing something familiar – feelings elegantly described by Freud in his 1919 essay ‘The Uncanny’ – Ruhwald creates the impression of memory alluding us. Even the title of his work Social Pieces of Furniture no. 6 is ambiguous, object and idea combine to tantalise the imagination resulting in an uncomfortably strange feeling.

Different ambiguities are set up by Richard Slee and Barnaby Barford. Both make direct references to tradition, to the decorative objects of the past, but do so with a combination of deference and parody. In his Cornucopia series, Slee tempts us with the idea of plenty and even excess, a long established historical form used in representations of the classical and mythological world. In today’s society such lavish cornucopia, at first glance a pleasing form, become a comment on the consumer society, on the pressure to indulge and enjoy, regardless of cost. Slee’s generous forms are not the innocent objects they at first appear. Barnaby Barford is less polite, the iron hand in the velvet glove. In Shit! Now I’m gonna be really late Barford reassembles dainty, uncontroversial figures recovered from charity shops and such like, paints and manipulates them into domestic disasters. With subtle, subversive humour Barford highlights the absurdities and pretence of modern life.

The figure, ‘the human clay’, that feature in the work of Slee and Barford are caught up in dramas, narratives that have a past, present and future. For Toubes the figure is more elusive while being more universal, more abstract and yet, paradoxically, more personal, more intimate. In She Global Toubes rejects both idolatrous traditionalism of the past and the brutal and abstract progressivism of the present. These works touch on inner feelings, on the turmoil and uncertainties of life; in rejecting a fictitious present they offer hope and affirmation for a shared humanity.

Ambiguity, the way objects can be read in numerous ways, are central themes in the work of James Rigler and Dawn Youll. Taking ordinary, everyday things as starting points, Rigler questions the way we form intimate relationships with objects to the point where they become invisible. These may be abstracted and colourful washbasins, glistening flowers/mops or garden sheds, objects that metamorphose from the known into the exotic. Like Rigler, Youll is drawn to a material that carries references to domesticity. With any form of representation recognition begins the moment we glimpse it, when we immediately feel the need make sense of what is presented, to interpret what we see, to make it part of our experience. Through the process of perception, the forging of mental associations, Youll offers glimpses of the urban environment and literally lays them on the table. Side effects can take many forms.